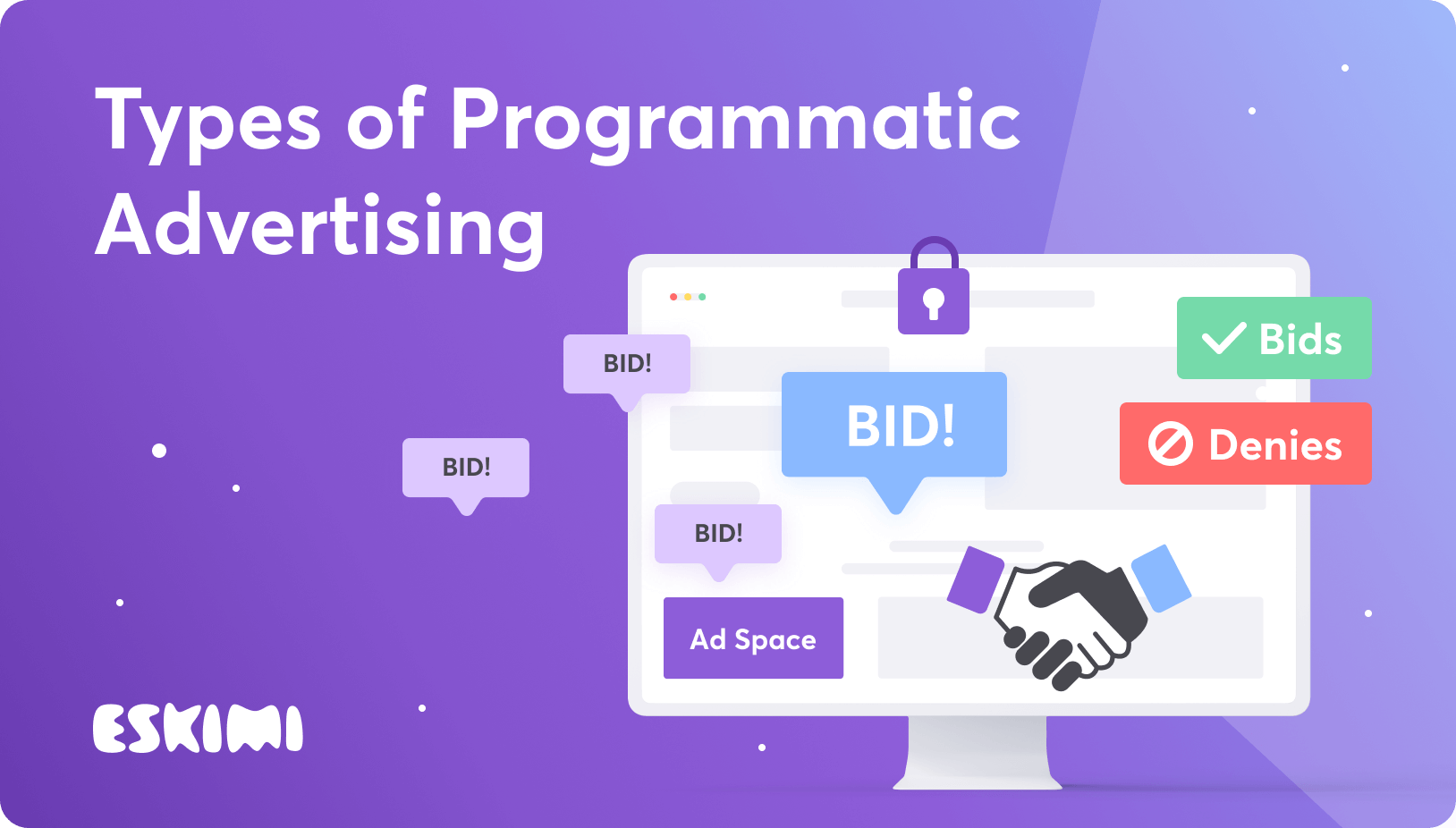 There are many options for running ad campaigns online. Each of them naturally comes with a ton of its own specific terms that can be challenging to wrap your head around, especially for those taking their first steps in this space.

Programmatic is one of those mysterious terms in the advertising industry that sometimes still need clarification despite its growing usage.

Therefore, let’s start with the basics and get familiar with the programmatic definition, types of programmatic advertising, and explore the ad formats it offers.

What is programmatic advertising?

As opposed to more traditional methods of digital advertising that are often manual, programmatic media buying utilizes large sets of data and automation. It enables brands to serve their ads to the right people at the right time, while for advertisers, it’s an opportunity to sell more available ad slots and maximize placement revenue.

How does programmatic advertising work?

Platforms like DSP and SSP allow advertisers and publishers to connect to ad exchanges or each other directly and complete media buying deals in a fraction of a second.

The whole process of programmatic media buying can be put into the following steps:

How do DSPs “discover” these ad placements?

Visitor behavior online is constantly tracked by cookies. The data websites collect is stored and analyzed in a DMP (data management platform) that is directly integrated into DSPs.

When advertisers choose their targeting and pricing criteria, DSPs bid on the available ad slots that meet them.

And just when you think you finally start to understand what programmatic is, RTBs, PMPs, and other acronyms put you off the track again.

Yes, programmatic advertising uses automation for media buying, but this can be done in several different ways.

Here are four types of programmatic advertising explained to help you get your head around it.

Real-time bidding, sometimes also called an open auction, is one of the oldest and most commonly used types of programmatic advertising that many even use as a synonym for it. The core function of RTB is media buying and selling via open auction on an ad impressions basis in real-time.

As the name suggests, the auction is open to the public, meaning that any advertiser and publisher on an ad exchange, DSP/SSP, or ad network can participate. As a result, there are usually hundreds of buyers and sellers competing.

Even though publishers can set the floor price for ads, the final cost of it is determined by demand. The highest bid on the ad space wins the slot, and the ad is shown to the website visitor.

PMP, or private marketplace, is another method of media buying. Although it’s also a real-time bidding environment, the main difference from RTB is that PMP is not an open auction – advertisers can only access the private marketplace with an invitation from publishers.

Put simply, PMP deals mean that publishers make their premium inventory available to exclusive partners that meet specific requirements instead of being open to all advertisers.

The selected advertisers are given a time-sensitive deal ID to access an auction. Once publishers set the floor price, the bidding starts. Just like with an open auction, the highest bid wins, and the ad is displayed.

As opposed to RTB and PMPs, programmatic guaranteed, as the name suggests, comes with a guarantee that the inventory is reserved for a particular buyer.

It doesn’t follow a bidding process – instead, the advertiser and publisher agree on a fixed price (CPM) and a certain number of impressions that have to be delivered for that price. Then, the ad inventory is designated for a particular buyer.

This type of programmatic advertising is closest to the traditional way of media buying since both sides need to negotiate prices and other relevant terms. However, it’s not fully manual as it’s still done in the programmatic ecosystem and eliminates such processes as manually exchanging ad tags, troubleshooting disagreements, issuing insertion orders, overseeing billing, etc.

With programmatic guaranteed, advertisers can advertise on premium placements, choose their ad inventory, set better audience targeting, frequency capping, and be sure about final costs.

What is the difference between PMP and PG?

Programmatic guaranteed and PMPs are both exclusive, but they’re exclusive in a different way.

The main difference between PMP deals and PG is that while the latter happens directly between two parties, PMP deals are made within a marketplace of other advertisers.

PMP still works on a bidding basis where out of invited advertisers, the highest bidder wins. However, this doesn’t guarantee ad inventory.

PG is a direct agreement between the advertiser and publisher to buy/sell a particular ad placement for a fixed price, ensuring that the ad will be displayed and the placement gets filled.

Programmatic guaranteed usually requires bigger budgets from advertisers “in exchange” for the possibility of controlling the exact placement and cost of ads.

Preferred deals are kind of “sneak peeks” into ad placements that buyers can get before they become available on open auctions or private marketplaces.

Similarly to programmatic guaranteed, preferred deals are direct deals between advertisers and publishers on specific, premium inventory for a predetermined price.

What is the difference between programmatic guaranteed and preferred deals, then?

In short, the difference between these two lies within ad inventory:

With preferred deals, the advertiser simply gets “a priority” to bid at the agreed price. If the buyer denies the placement, the publisher can sell it in open or private auctions.

Now that you know what possibilities programmatic advertising holds for marketers, let’s briefly go through the most common programmatic ad formats you can use in your ad campaigns.

Display ads are one of the most popular ad formats overall and usually refer to any form of visual online ad.

However, in the programmatic advertising context, display ads are considered those that appear in the header, footer, or sidebar of the website. They can be static or dynamic and served in different sizes on various publisher sites.

Rich media ads are more of a type of programmatic ads rather than a format. They describe a type of ads that contain elements that encourage user engagement and invite them to interact with the ad.

For example, to play a little game like Fanta did together with Eskimi (try below!).

The possibility to interact with ads can significantly impact engagement rates and ad recall, boosting the overall campaign results.

Video ads are an ad format available within video and streaming content platforms. You will likely come across such terms as:

With video being such a popular form of entertainment and a way of consuming content, it’s no surprise that advertisers are looking for ways to benefit from it.

That’s especially the case with CTV ads that appear within streaming content. They help reach audiences that are more difficult to reach using linear TV (or are not available at all) and prefer watching their favorite shows across various devices and online services.

Audio ads are delivered in audio format through various online streaming platforms, such as Spotify, Apple Music, or Amazon Music.

Similarly to video content, audio is going through a growth phase as more and more people turn to podcasts, audio streaming platforms, etc.

By the end of 2022, the ad spending in the audio advertising segment is projected to reach $35.74bn, making it a good opportunity for advertisers to explore this growing channel with programmatic ads.

Native ads are another heavily used ad format, mainly because of the possibility of blending them with their context.

Native ads are designed to match the look, feel, and function of the content/platform where they appear. For instance, a native ad can occur in the middle of the article you’re reading and look like it belongs there as visual material.

Therefore, DOOH is OOH but with a digital twist. Ads are still displayed outdoors in public places but on digital screens, like screens in airport arrival halls, shopping malls, sports venues, etc. Digital displays give advertisers more freedom to craft their messages.

As the gaming industry has been growing exponentially over the last ten years, becoming bigger revenue-wise than the film and music industries combined, it’s no surprise that in-game advertising is on the rise, too.

Globally, over 3 billion people play video games, spending an average of nearly 9 hours per week immersed in the gaming environment. That’s a huge and very diverse audience to target with promotional content.

One of the key benefits of in-game ads is that they provide a non-intrusive way to reach the right people. They naturally blend with the game environment and don’t interrupt the process, resulting in a better user experience and more positive brand perception.

Ready for your next programmatic ad campaign?

If you’re looking for an effective, automated, therefore, efficient way to run your ads, programmatic is the way to go.

Even if all these types and programmatic ad formats still sound overwhelming, it’s DSPs and SSPs that do all the heavy lifting. Behind them, you can always rely on a team of programmatic experts who are ready to help.

Ready to try? Contact the Eskimi team or book a demo to learn more about where programmatic ads can take your brand. 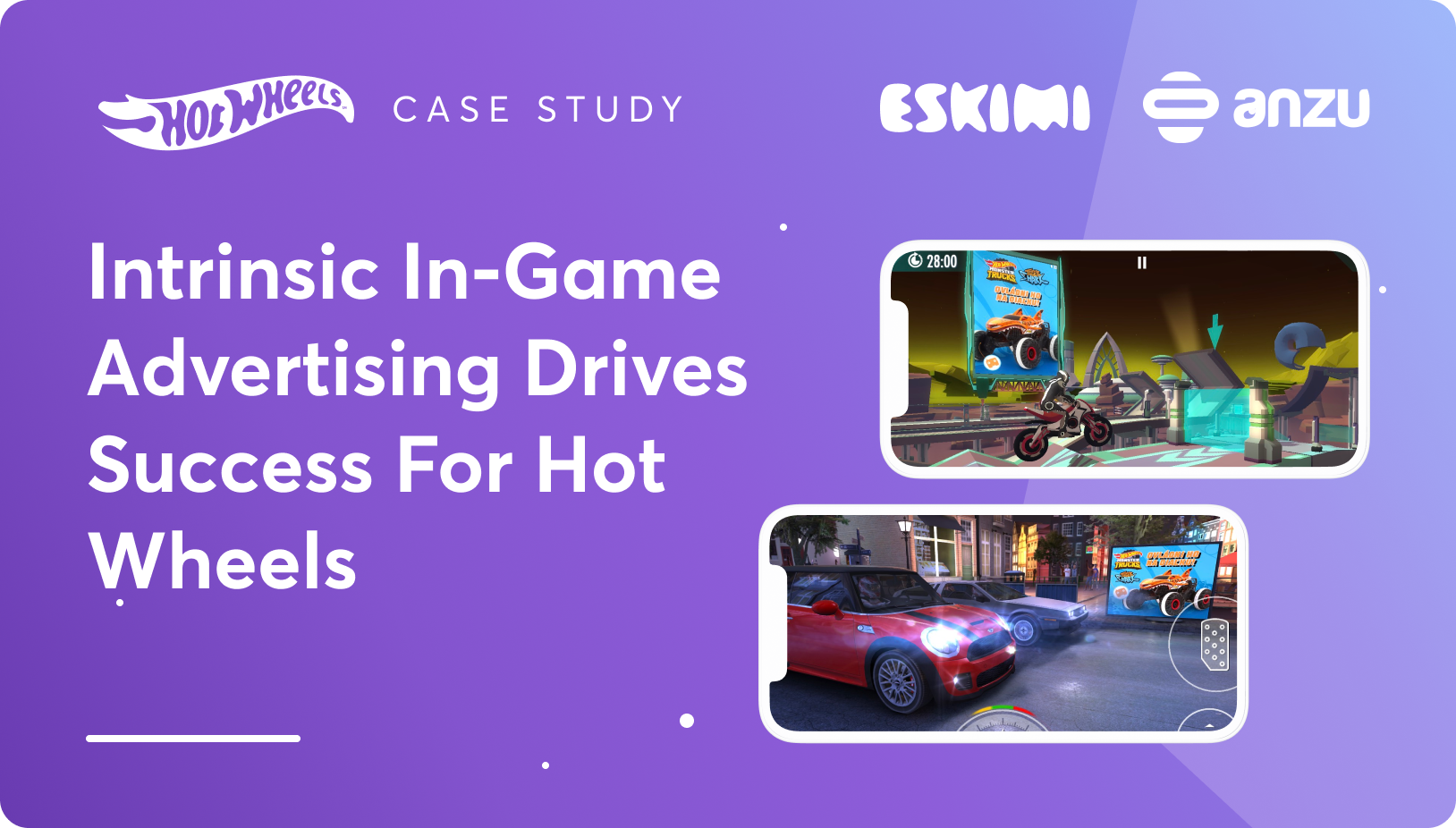 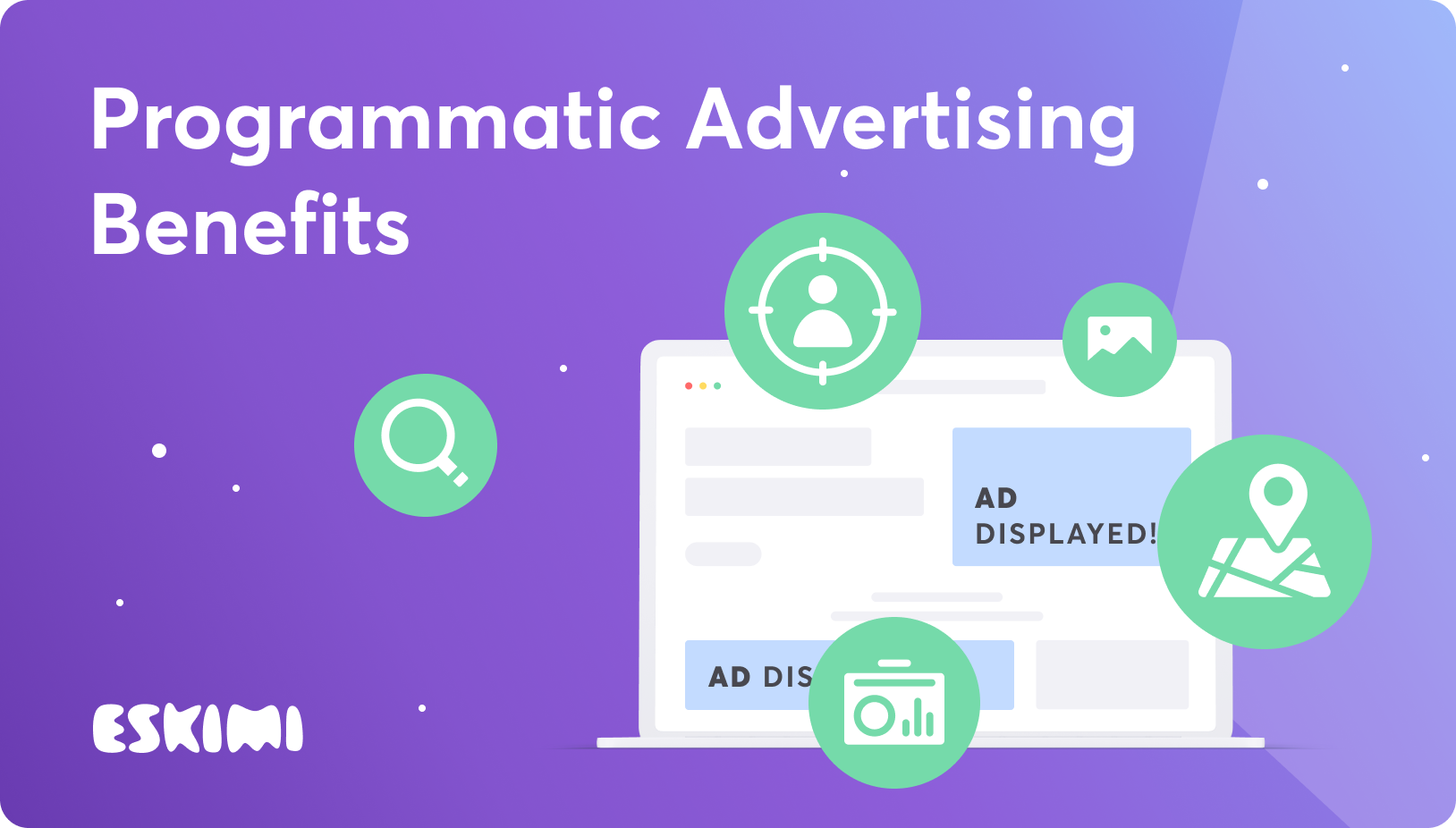 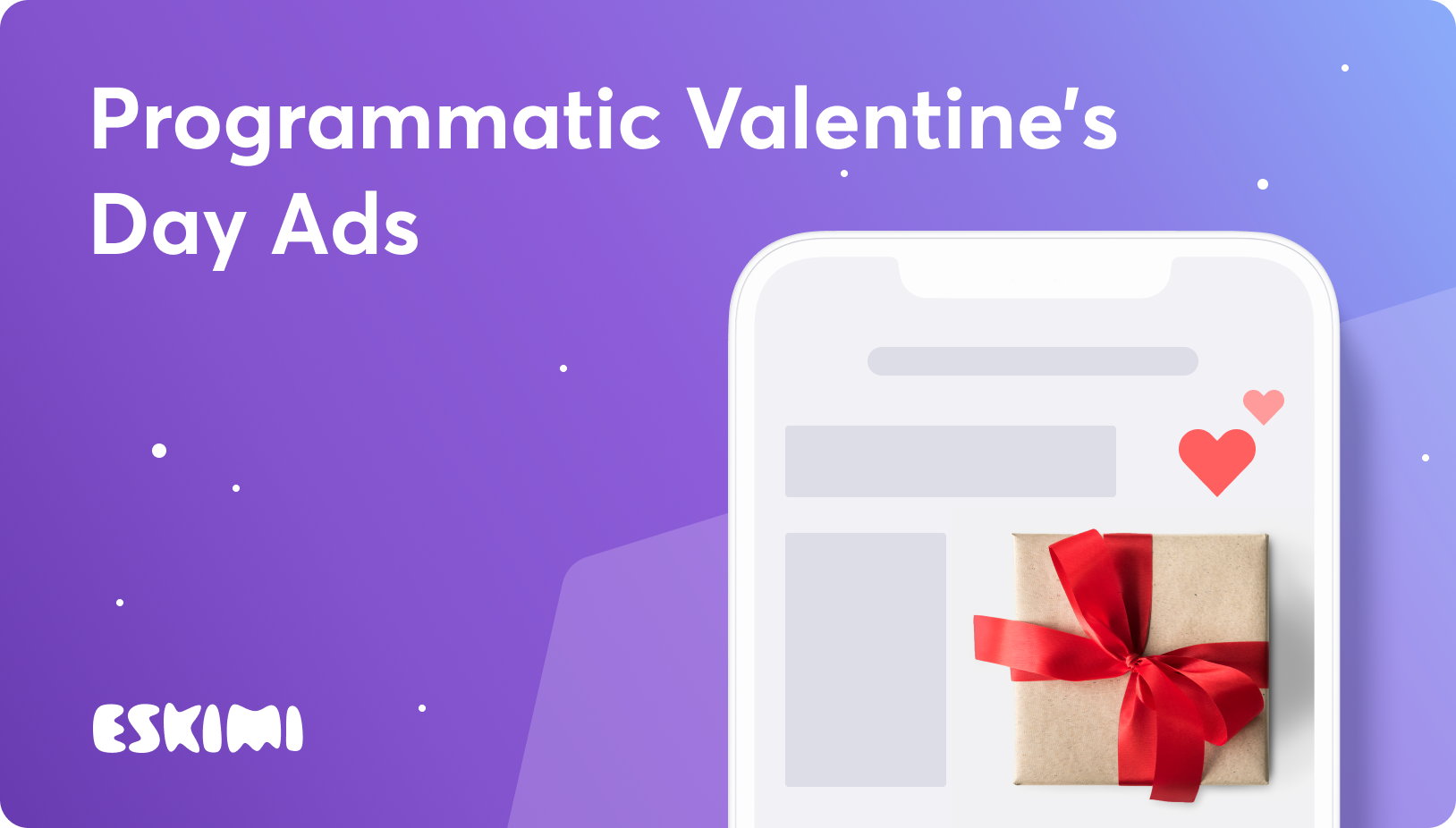