Top 10 Rich Media Ad Examples to Inspire Your Next Campaign 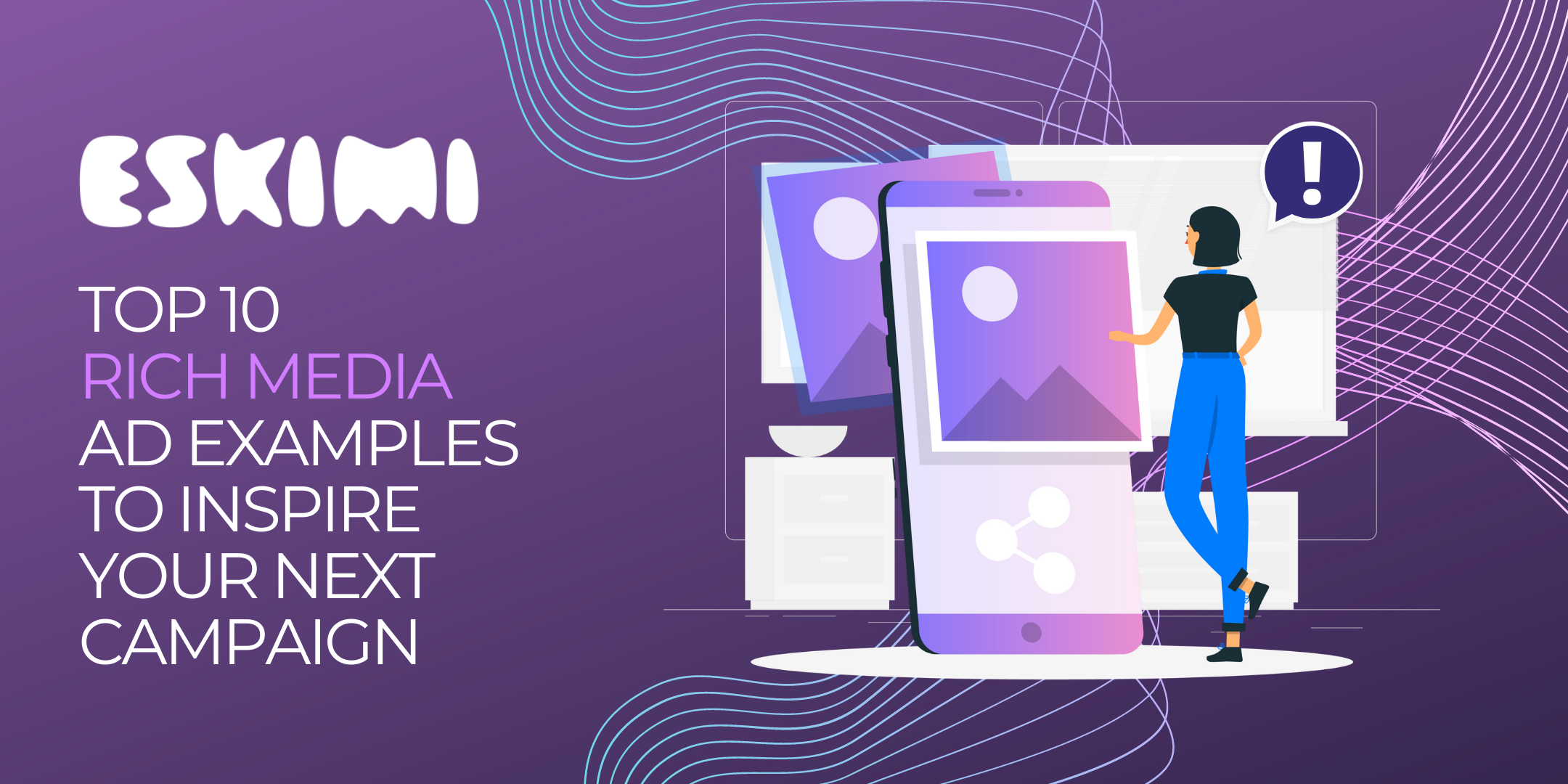 The use of rich media ads in digital campaigns is one of the crucial factors that drive traffic to your brand’s landing page. And we all know how important innovation is in the competition to grab audience’s attention.

Innovating your rich media ads means introducing novel, original, clever, and attention-grabbing ideas that are incorporated within the ad unit in such a manner that’ll seize the viewer’s attention. On top of that, it’ll make them remember your brand, encouraging users to share it on their social platforms or via word-of-mouth.

Rich media ad innovation may come in several ways but the end objective remains the same: to attract the viewer’s attention among all the advertisements they’re being exposed to, and to inspire them to participate, interact, and have an overall positive experience.

In this article, we’ve compiled the top 10 examples of innovative rich media ads to inspire your next campaign.

Here are 10 high-quality examples as inspiration for your next rich media ad campaign.

Ariel partnered with Eskimi to come up with an innovative ad campaign. We used an animated rich media ad to promote the detergent in an interactive manner. Looking like a shooting game, the advertisement instantly grabbed attention as it encouraged the viewer to engage with the ad.

Once the viewer shoots all dirt stains and germs, they’re taken to a screen that shows ‘Good Job’ and a button to learn more safety tips.

DreamWorks intended to do something different to create buzz around the release of the Trolls movie. It launched more than 550 advertisements on different platforms across 36 different worldwide markets. The company used the art of the website takeover on various sites like Amazon and IMDB as their main advertising creative. Their brightly coloured rich media ads enchanted the audience and proved to be successful as the movie earned $346 million internationally.

Intel showed their new sleek laptop in a manner that tempted their busy consumers to try it out. They used 3D technology to help customers see for themselves how thin the laptop was. Moreover, they also utilised 360° video in their advertising campaign with hotspots that displayed customers the differences between their product models.

This rich media campaign allowed Intel to drive massive brand engagement. It attained more than 35,000 hours of content exposure and 413,000 customer visits to the website.

In this experience, which ran in conjunction with premium long-form streaming video content, customers could spend at least 30 seconds interacting with four different “Alright Brothers” videos before continuing to their entertainment of choice. They could also click straight through the advertisement to JetBlue’s homepage to book their own trips.

This creative ad doesn’t look like a traditional ad from any angle. In fact, it is more of a landing page that is completely built in HTML5. This means it’s supported on nearly every mobile device and particularly formatted for tablets. This execution for the movie “The Hobbit” takes you through the narrative and characters in a very gesture familiar manner to the audience, optimised for mobile devices.

These advertisements used AR technology and enabled every customer to use their smartphone’s camera to try on various nail polish colours in real-time. This advertising campaign incentivised consumers to engage with the rich media AR advertisements, resulting in a high click-through rate (CTR) of 0.08%.

With the aim to announce a new product line in a creative way, Harley Davidson executed interactive ads that familiarised customers with new models. These ads were run on Hulu as 30-second ads during commercial breaks.

Rather than inactively watching a Hulu advertisement, consumers were asked to discover the different Softail motorcycle models within the commercial experience. Consumers could learn as much as they wanted about each bike before either clicking out or visiting the website to learn more. This campaign was extremely fruitful, grossing a 9.9% mobile CTR.

Sonic promoted a summer deal in 2019 that offered 50% off on shakes and ice cream slushes after 8PM. The brand made rich media ads that would fascinate consumers, increasing awareness around this deal.

Sonic used bright colours to attract customers and also showed a neon-coloured countdown to 8PM. The countdown was live and showed the exact amount of time until the special 50% deal time. This interactive advertisement also included a “Find My Sonic” button so that the consumer could also know precisely where to head after seeing the advertisement.

Nissan Ambicultural Campaign won the Best Mobile Rich Media Online Ad award this year. The brand’s motto is “innovation that excites,” and that’s applicable to marketing as well. Nissan understands that no demographic is monolithic, especially the Hispanic market.

According to PWC, Hispanic customers want to select whether they’re advertised to in Spanish or English. That’s what Nissan did to increase awareness among Hispanic customers for its 2019 auto line-up. It made an interactive video campaign that allowed audiences to effortlessly switch between English and Spanish mid-experience.

Wells Fargo developed a Tetris-inspired interactive experience to run together with streaming video content on desktop and mobile. It highlighted their Control Tower feature, which enables consumers to track recurrent charges.

After viewing a short trailer, consumers were given the option to choose an Easy or Hard mode for stacking. Next, they had to do their best to fit as many meal subscriptions as possible into the refrigerator. When full, customers were given an evaluation of how well they performed and a follow-up message that only Wells Fargo provides the ability to monitor recurring payments with their new feature.

Leveraging rich media is a great technique for your advertisements to stick out as it’s recognised to seize audience’s attention. An eMarketer study also illustrates that brands witness higher engagement levels (around 16.2%) using rich media advertisements compared to static banners.

At Eskimi, we’ve helped several brands step up their digital advertising game. Check out our creatives gallery to get a glimpse of our work. Consider using Eskimi rich media if you wish to grow your ROI and engagement rates by up to 10 times. You can also use Eskimi rich media builder to create rich media ads yourself.

If you want to know more about how Eskimi can transform your advertising team’s display marketing with powerful rich media ads, get in touch today to learn more about our services.

Start your project with Hyperion

Solutions
DSP
Creatives
Telco
Targeting
SSP
Eskimi
About Us
CertificationBlogCareersContactPrivacy Policy
Cookie Preferences
Get marketing secrets
You have successfully subscribed to
the newsletter. Thanks!
Oops! Something went wrong while submitting the form. Try again!
By clicking “Accept All Cookies”, you agree to the storing of cookies on your device to enhance site navigation, analyze site usage, and assist in our marketing efforts. View our Privacy Policy for more information or edit Preferences.
DenyAccept
Congrats! Click the button below to download our guide:
Download
PDF file, 19,6 MB
Oops! Something went wrong while submitting the form.